What is PVD and Sputtering?

Physical Vapor Deposition (PVD) commonly known as sputtering is an established and widely used method in the deposition of thin films and device fabrication.  KDF has many years of experience in PVD or sputtering of thin films. It has the talents and tools to deposit and characterize, with high precision, various films ranging in thickness from a few angstroms to hundreds of microns. This covers most applications requiring thin film coating.

Sputtering is one of the most versatile deposition techniques of contemporary thin film technology. It involves the deposition of a material ejected from a source called “target” onto another material called “substrate”.  This is accomplished by a bombardment of the surface of the target with gas ions accelerated by a high voltage.  Particles of atomic dimensions from the target are ejected as a result of momentum transfer between incident ions and the target. The target-ejected particles traverse the vacuum chamber and are subsequently deposited on a substrate as a thin film. Thin film sputtering is carried out in a high vacuum environment with a variety of geometrical shapes and configurations, such as down, up, and side sputtering. KDF offers many sputtering configurations to accommodate different substrate sizes and shapes, as well as custom-made PVD systems. All systems can operate in DC sputtering, RF sputtering, Pulsed DC sputtering, and HIPIMS sputtering. 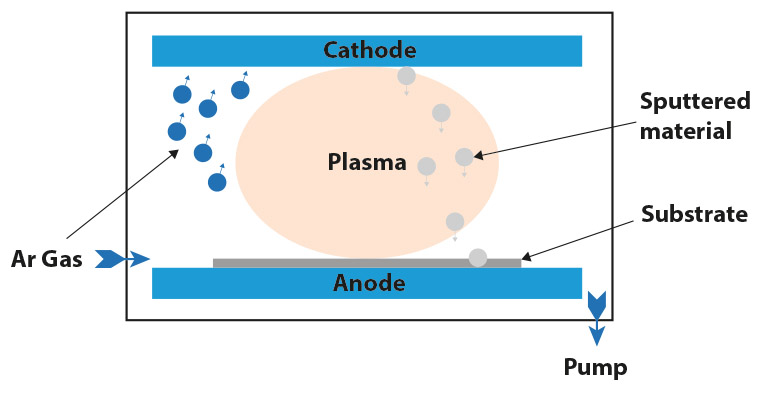 Early mode of sputtering was DC (Direct Current), and represented the simplest and most practical method of metal film deposition. As the demand for thin films application has been growing, sputtering technology has been constantly refined and improved to meet the industry challenges. Today’s sputtering involves many configurations such as, DC magnetron, RF (radio frequency), Pulsed DC, and the newly HIPIMS sputtering. DC magnetron is an enhancement for DC sputtering and does improve the deposition rate. RF sputtering expands the use of sputtering to non-metals. Pulsed DC is another enhancement for DC magnetron mode to optimize reactive processes. The recently-developed HIPIMS sputtering has the advantage of yielding hard coating and enhance step coverage in high-aspect applications.

The DC sputtering mode in a diode configuration is slow and temperature limited. Magnetically Enhanced Sputtering utilizes a magnetic field that is at right angles to the electric field to increase ionization efficiency in the plasma and confine the electrons near the target. Thus, enhancing the deposition rate without overheat. In fact, Magnetron sputtering offers sputtering rates that are an order of magnitude higher than conventional DC method. This is achieved by a set of magnets mounted on the back of the target.

RF sputtering is similar to DC sputtering, but uses an applied RF voltage to eliminate charge buildup on the target. RF sputtering can operate in a diode or magnetron-enhanced configuration. The advantage of reactive sputtering is the ability to sputter dielectric target like quartz.

Pulsed DC sputtering is used to minimize arcing and target poising in reactive processes. This is achieved by pulsing the applied voltage with a frequency in the range of 1-360kHz. The voltage is reversed for about 1 micron-second to clean any reactive buildup on the target.

HIPIMS (High Power Impulse Magnetron Sputtering) is a new sputtering technique that can produce highly dense, smooth, and hard films with enhanced conformality or step-coverage for high aspect ratio applications. This is the result of a highly dense and ionized plasma that is generated by HIPIMS. In conventional magnetron sputtering, increasing plasma density through power is limited by heat dissipation for any practical gain, and the production of ionized plasma is not a simple task. HIPIMS is based on the use of special power supplies with of a very high voltage to generate short pulses of energy up to a Megawatt peak power. Thus, creating a very highly dense and ionized plasma. KDF has an extensive experience with HIPIMS, and has already developed and optimized many HIPIMS deposition processes along software integration, some of which are currently being used in a manufacturing environment.

Tool operation and recipe handling are fully automated. KDF has developed an advanced software platform with a user friendly interface. The platform is versatile, but it can be customized for customer-special applications.